I built my first computer in 2003 (with a socket 478 P4 3.2GHz and a GeForce FX 5950 -- had to be ready for HL2) and I've been addicted ever since. Below is the computer setup I started in 2009; since then, almost every part has been replaced at least once. In 2019, I rebuilt a brand new system based on an AMD Threadripper 2990WX. The internals for everything are listed a bit farther down the page. 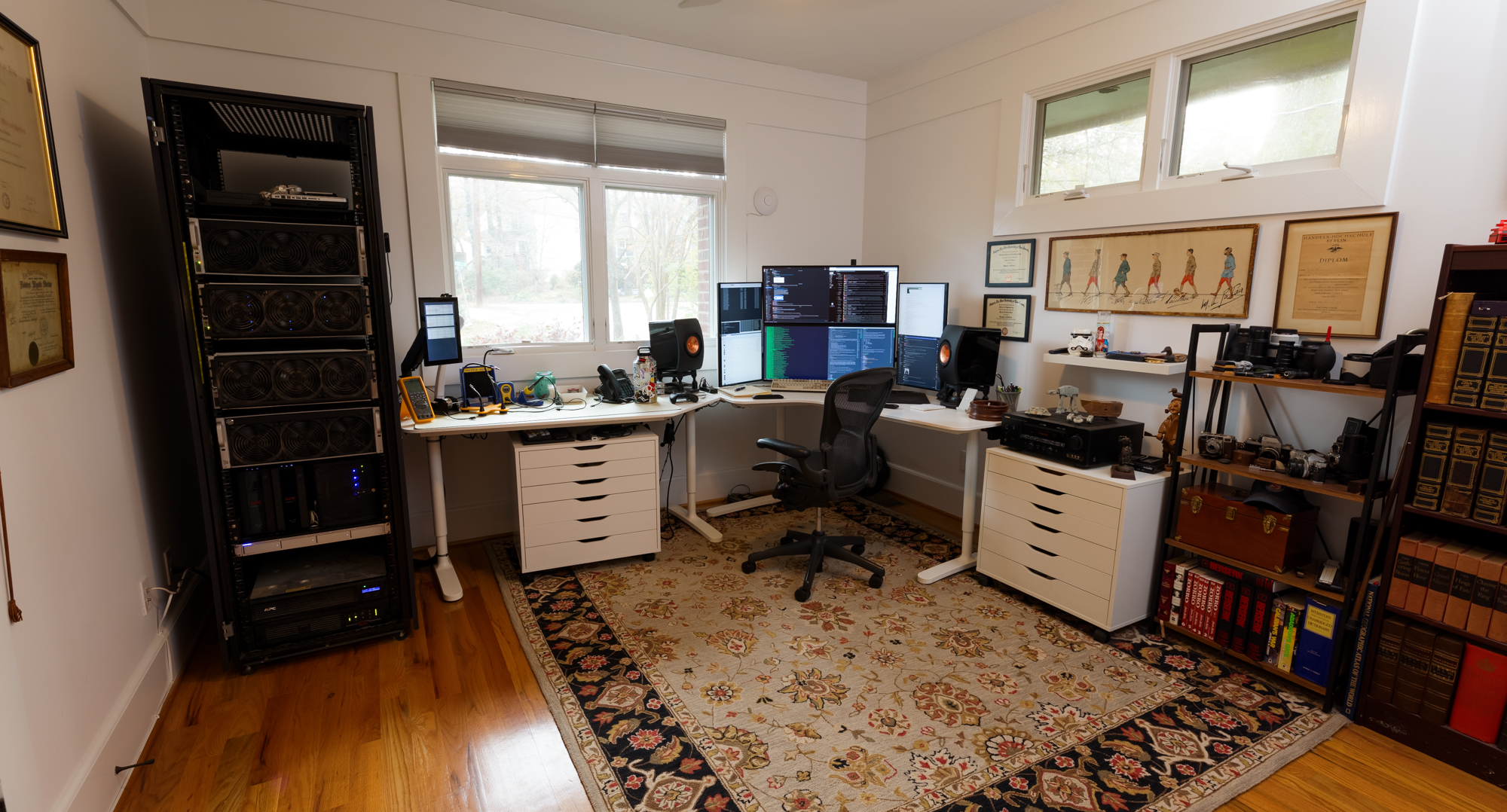 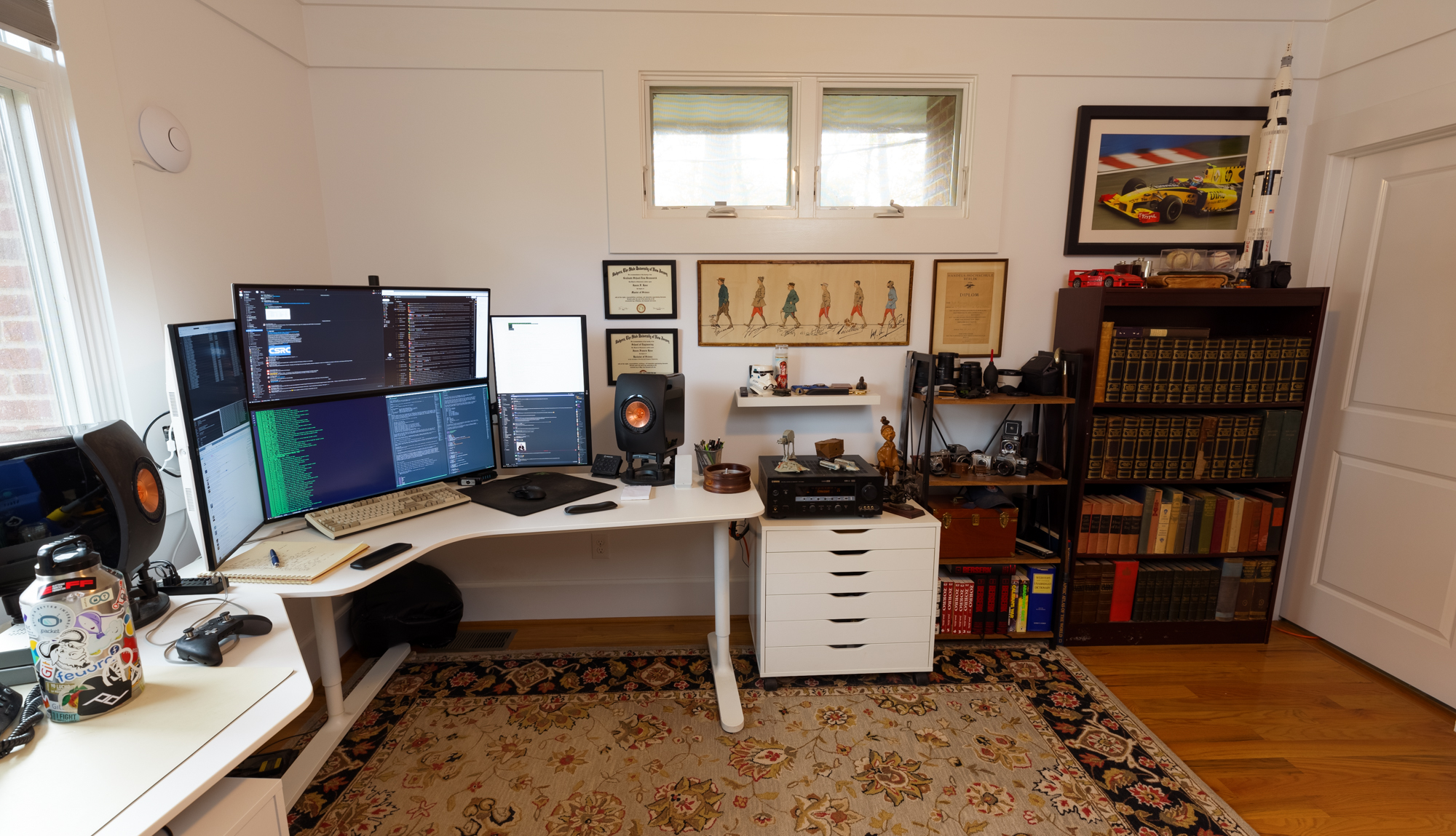 When I upgraded my workstation, I went ahead and upgraded my monitors as well. I have 2 of LG's 5K2K widescreen displays stacked on each other with a pair of LG 4K displays in portrait orientation flanking them. This massive wall of 38.7 million pixels gives me enough screen real estate for multitasking on multitasking. I've had to use special active optical DisplayPort and HDMI cables from Black Box to span the 25' or so to my server rack, but it was worth it.


My new workstation is based on the same Supermicro 846 chassis I used for my file server, but I hacked it apart to fit in all the custom water cooling stuff I needed for the build. I designed and 3D printed a mount for some 140mm fans and my radiator to go in the front "mouth" of the chassis. The details on the build are listed below.


In the past, I've always used headphones for audio. The HD6XX's (which replaced my HD595s) are very comfortable and sound great when paired with the Shiit Magni/Modi stack. More recently, however, I've really been enjoying my KEF LS50 speakers. I would like to add a subwoofer for fuller bass, likely a Hsu VTF-15H Mk2. I currently have my headphones set up as a headset with a ModMic both for gaming and for business calls. I'm also using a StreamDeck to control audio playback while in games and quickly launch common applications.


I've had the Ikea Bekant desks for a few years now and I'm pretty happy with them. I would have preferred the Galant, but they discontinued it a few months before I purchased. While I'm happy with the Bekant, I wish they had more of a selection of different sizes that matched up together like the Galant did, though. For reference (an overly-detailed reference; I couldn't find any of this info online when I was planning), there are 5 different desk shapes for the Bekant: a 55"x24" rectangular, a 63"x31" rectangular, the two "L" shape corner desks, and the 5-sided. On the corner desks, the ends of each side of the "L" are different lengths: ~20" on the short side and ~24" on the long side. Obviously, only the end on the longer side will match up with a rectangular desk (the 55"x24"). However, with this combination, you would end up with a really long desk (nearly 10 feet) with a stubby little foot on the "L" (43"). The only mate for the short side of the "L" desks is the 5-sided desk, which is ~20" on the right side and ~24" on the left. The problem is, they only make one version of the 5-sided desk, so if you want use it with the right-hand corner desk, you have to have the pointy side facing away. This really leaves you with only one option for a large corner desk, which is the configuration I have here. Having the little pointy end on the 5-sided desk off to my left isn't bad at all, but the right foot of the 5-sided desk does get in the way sometimes (you can see in the pic that it goes perpendicular out from the wall). Unfortunately, there aren't any options for mounting the leg differently as the metal base is pre-cut, and it would likely be unstable mounted any other way. One day, I would like to build a custom desk, but the Ikea setup works well for now.


I built the file server in October 2016. I have an extensive writeup on it here, but to summarize: The server is running on FreeNAS 11.1-U6 with 6x 8-wide RAID-Z2 vdevs with 8TB WD Red disks ~240TB of usable space. 24 drives are installed in the main chassis with another 24 in the expansion chassis. The drives in the main chassis are connected to an LSI 9305-24i through a JBOD backplane. The expansion shelf drives are connected through an LSI 9305-16e and a SAS3 expander backplane. The boot volume is stored on 2 Intel 540s 120GB SSDs in RAID 1. I have 2x 2TB Crucial MX500 SATA SSDs mounted inside the chassis as scratch space. The server is housed in a 2x SuperMicro SC846 chassis, each with two 920W redundant PSUs. The system is built on a SuperMicro X10SRL-F LGA2011-v3 motherboard. I’m using an Intel Xeon E5-2666 v3 CPU (10 cores/20 threads @ 2.9GHz) and 8 modules of 16GB DDR4 Samsung ECC/registered memory for a total of 128GB of RAM. I’m using a Noctua cooler on the CPU and I replaced the noisy stock chassis fans with quieter Noctua fans. I got a pair of APC 1500VA Smart-UPSs to deal with the relatively frequent power outages in the area. I also added a 3D-printed front fan shroud on each chassis to hold 3x 140mm fans blowing directly into the drive bays for added cooling. I have 10Gbe copper networking on the server and my desktop.


I set my primary dataset with recordsize = 1MiB to account for data block placement in an 8-drive Z2 vdev. All of the data is shared via SMB/CIFS. The system used to host about five Debian-based bhyve VMs to run various services I use on a day-to-day basis (including nginx, pi-hole, an OpenVPN server, and an rclone client I use to back up my data to the cloud), but I've moved those to a dedicated Proxmox server I built in early 2020. I have scripts set up to send SMART and zpool status reports to my email address on a weekly basis and scrubs/SMART checks scheduled every 2 weeks. I have a set of scripts running on the FreeNAS unit and some Raspberry Pi units to control all the fans in the system based on live temperature data and display all the system vitals on an 11" touchscreen next to the rack. Some photos of the server are below. 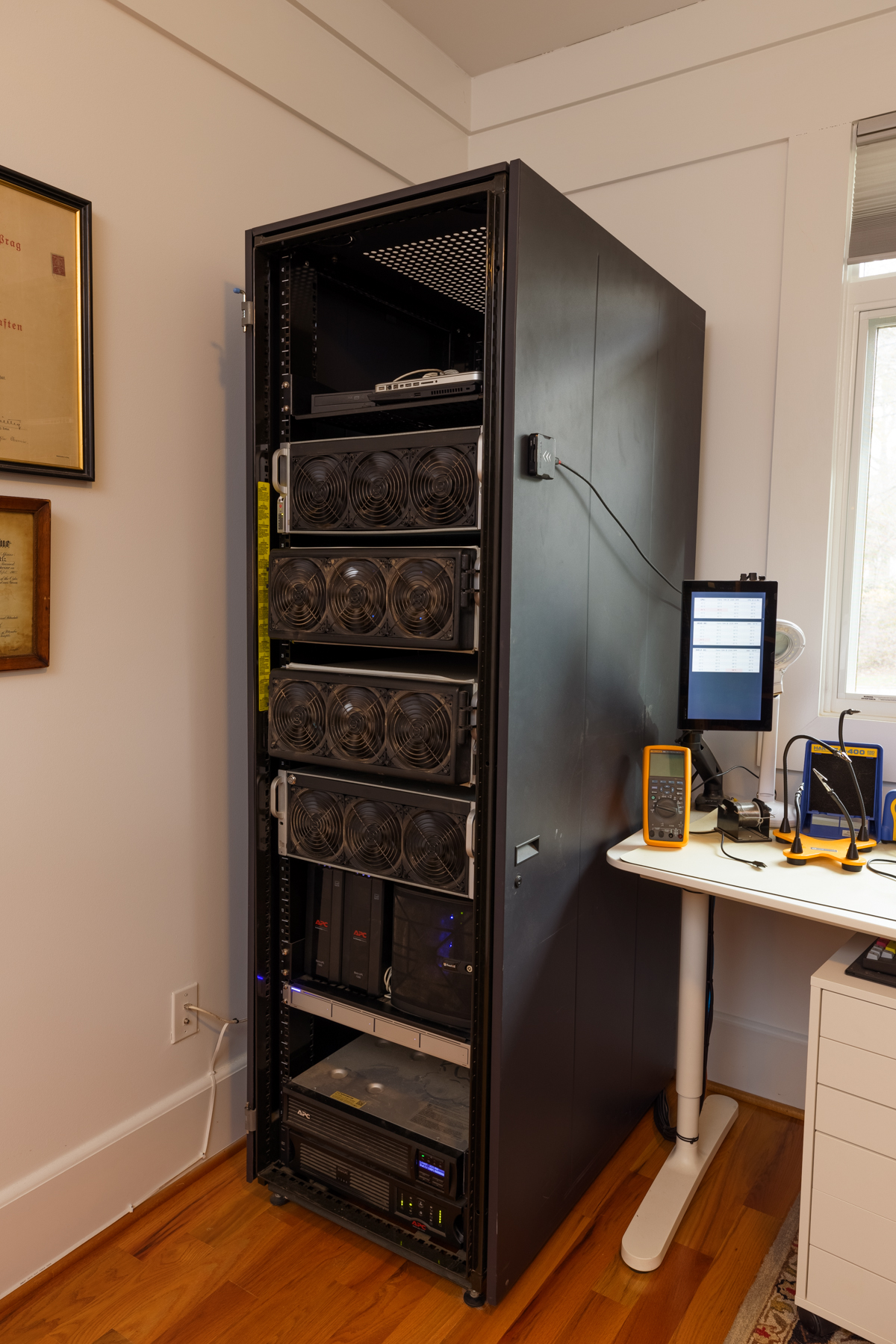 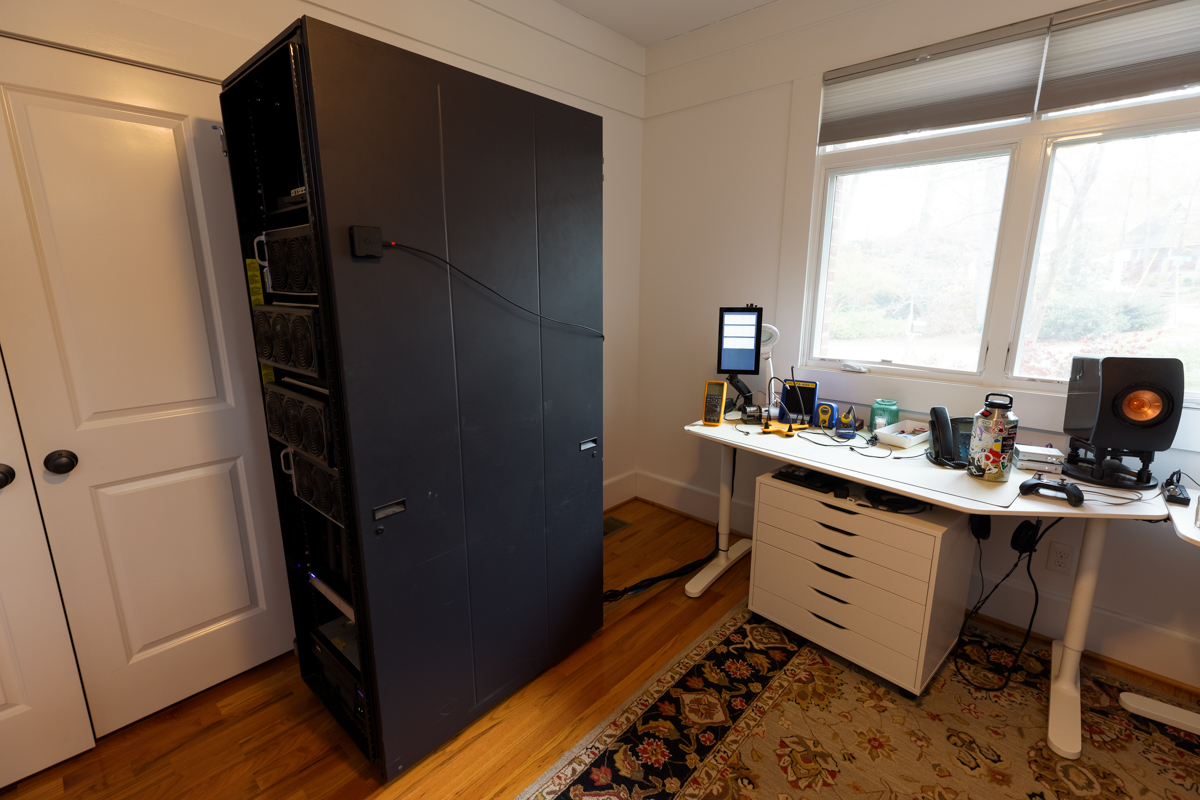 The whole rack rolls out several feet so I can get behind it when needed. 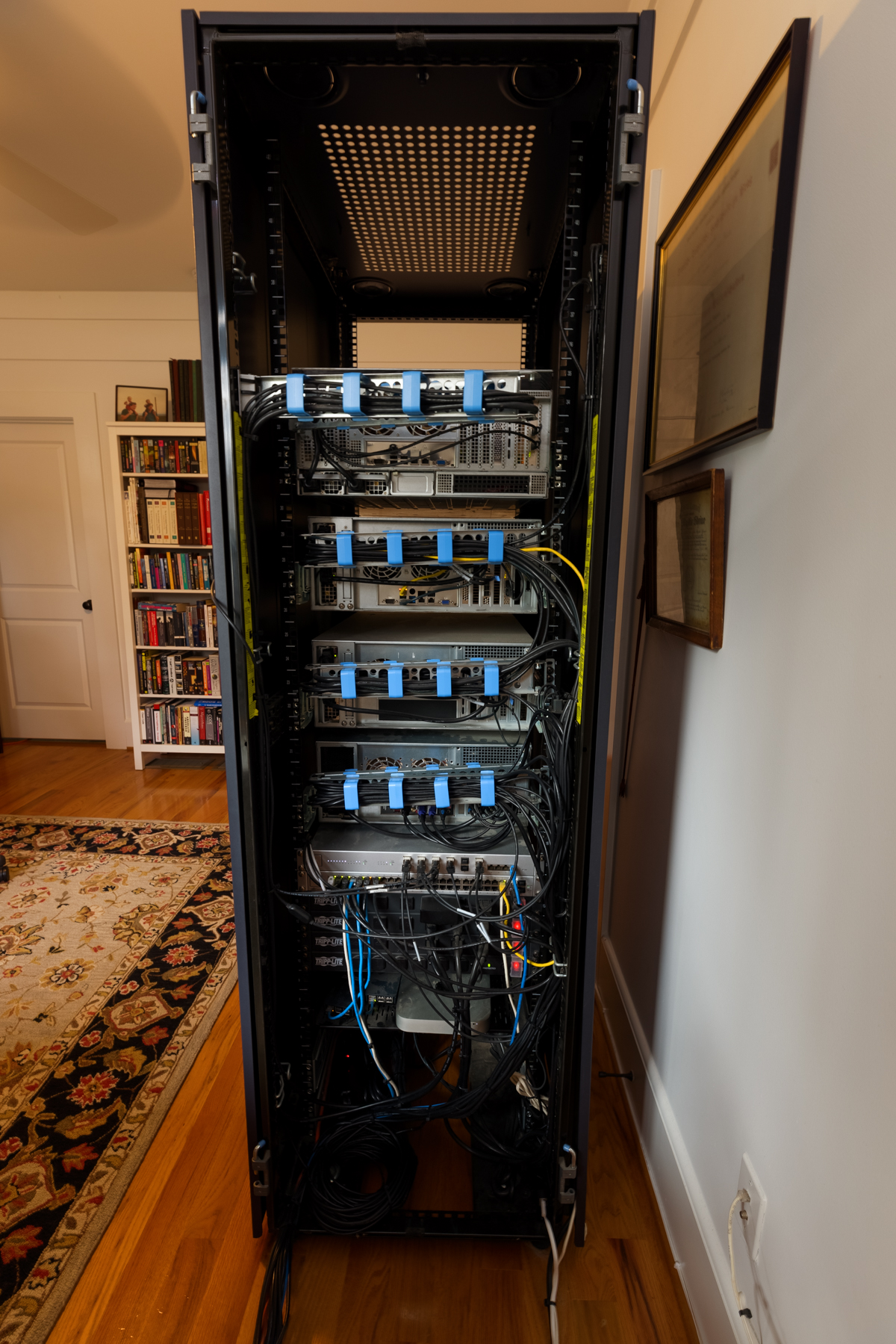 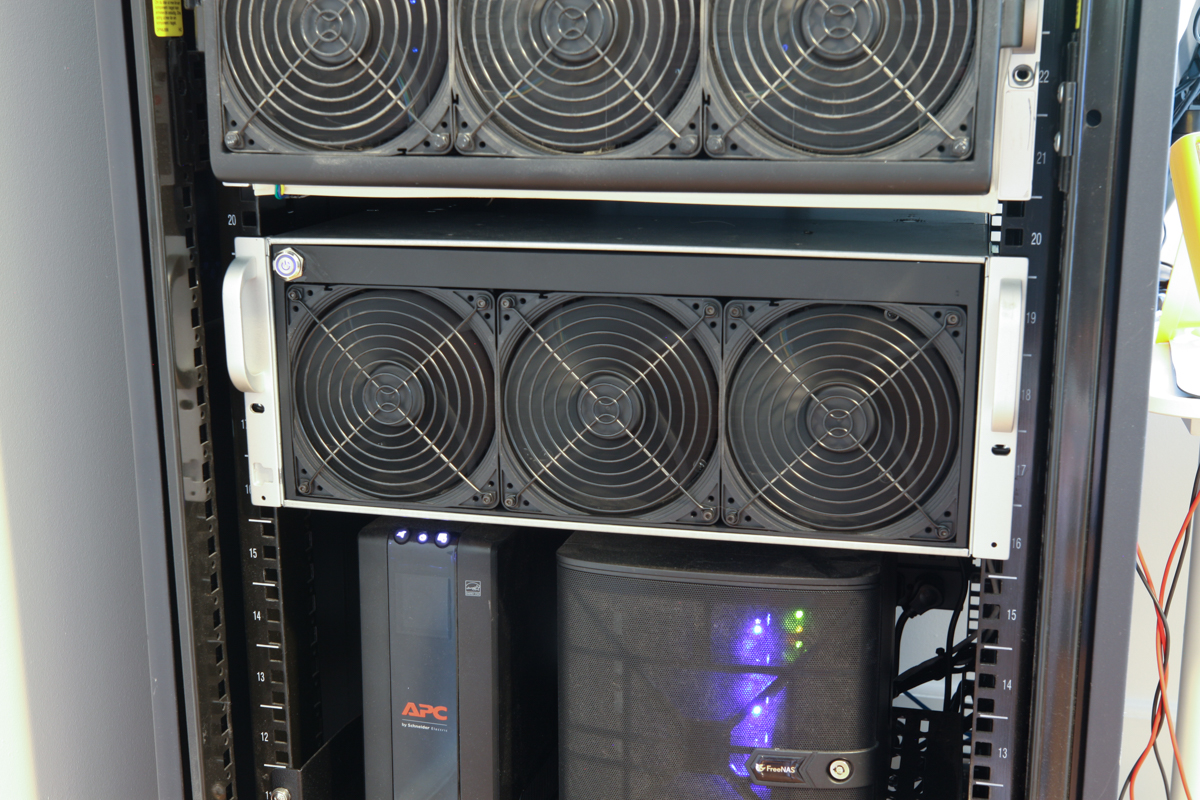 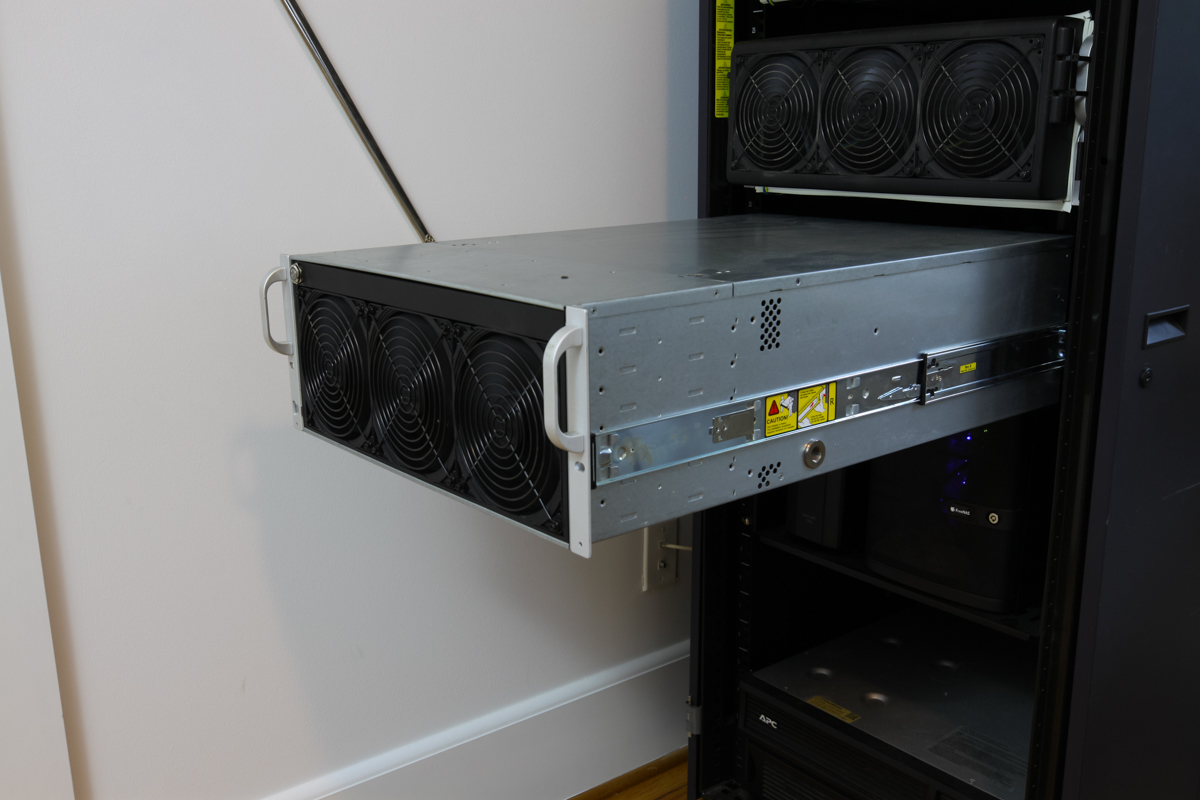 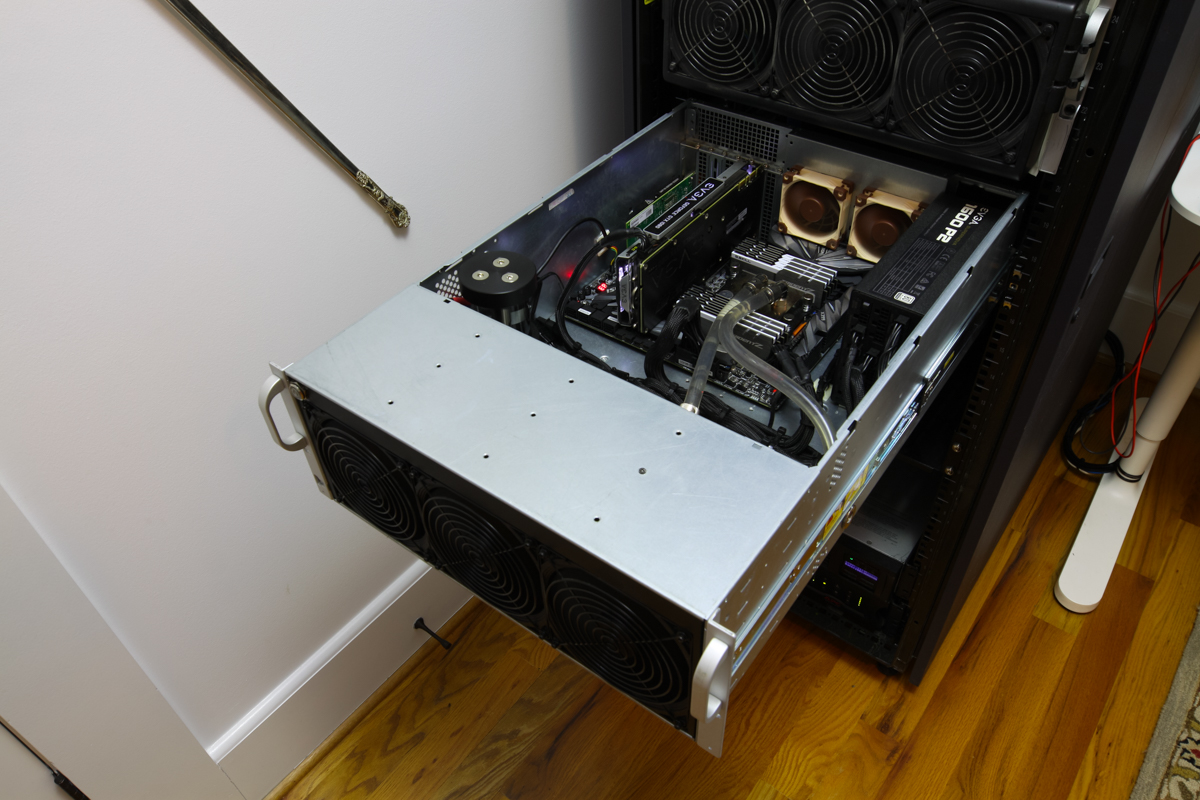 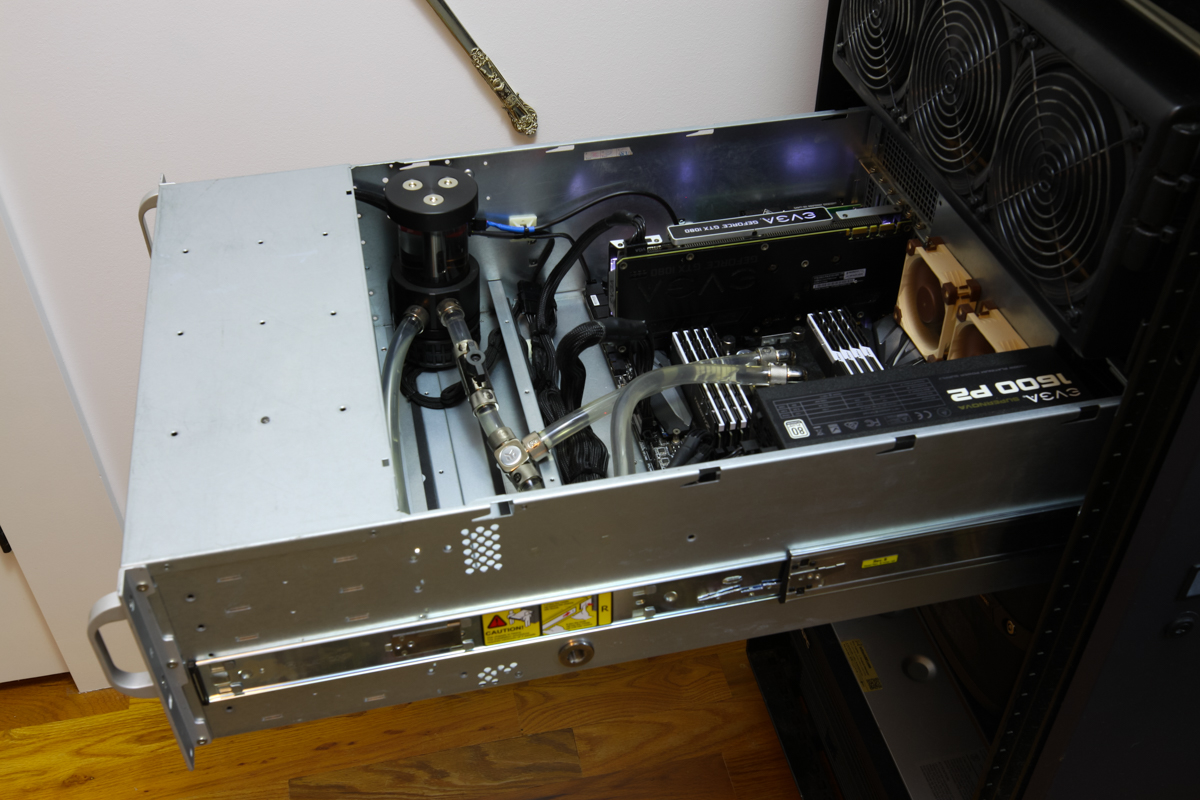 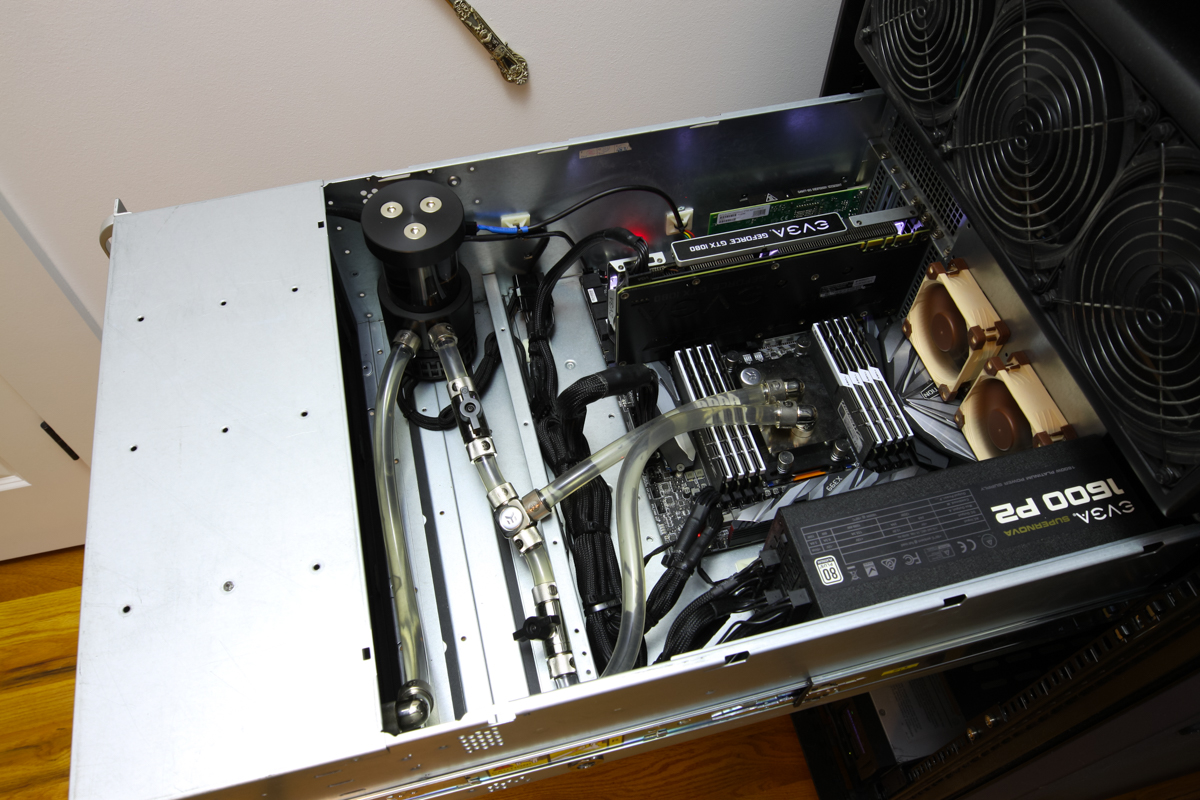 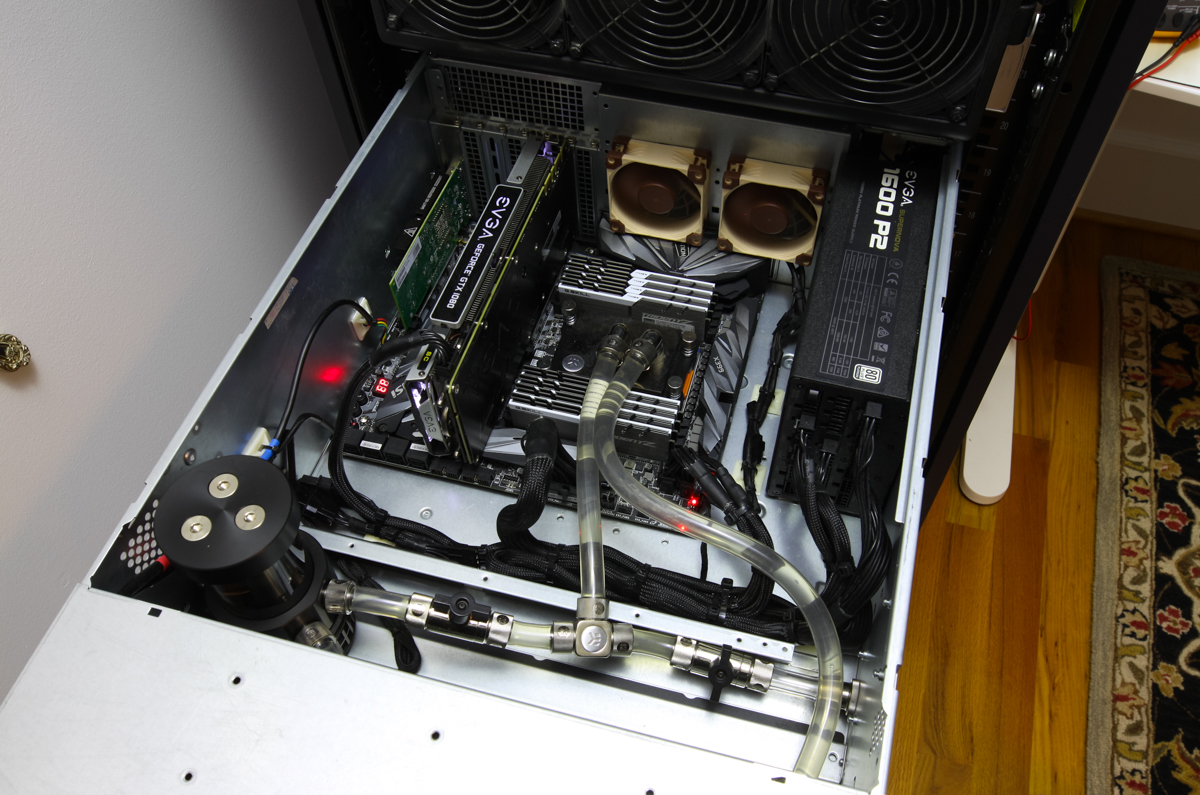 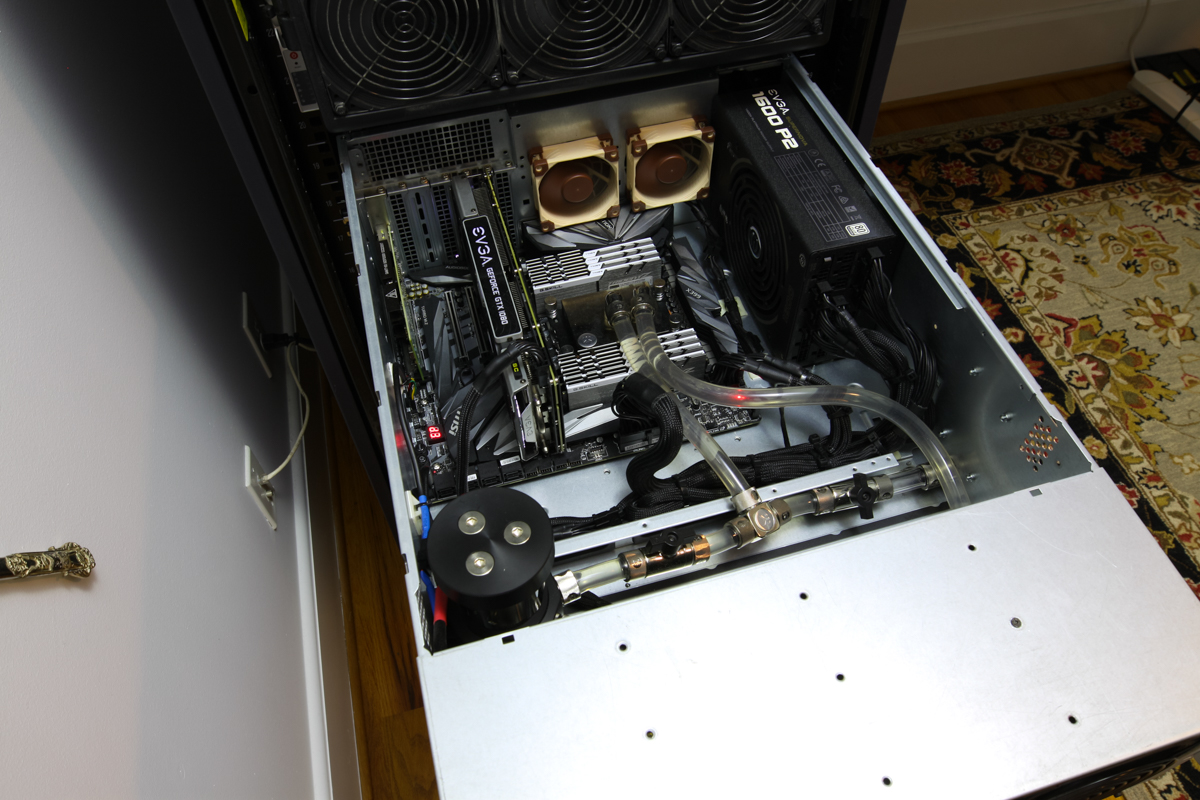 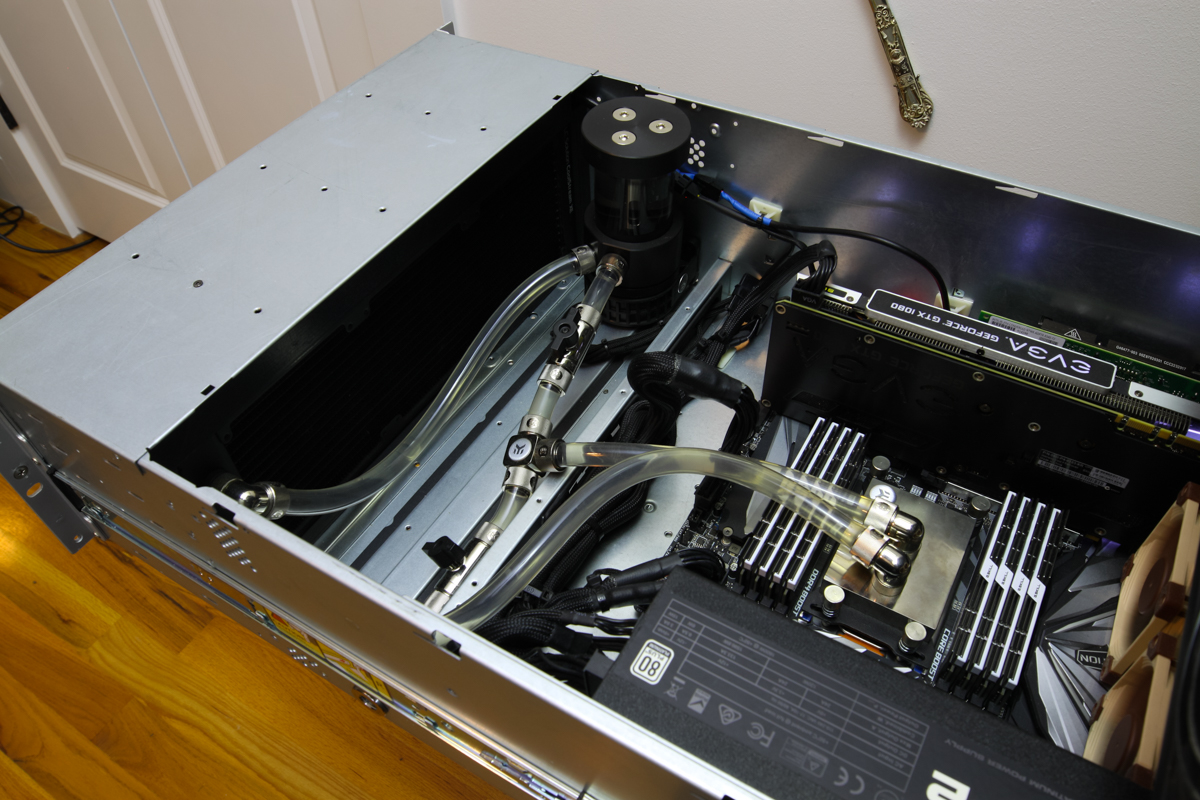 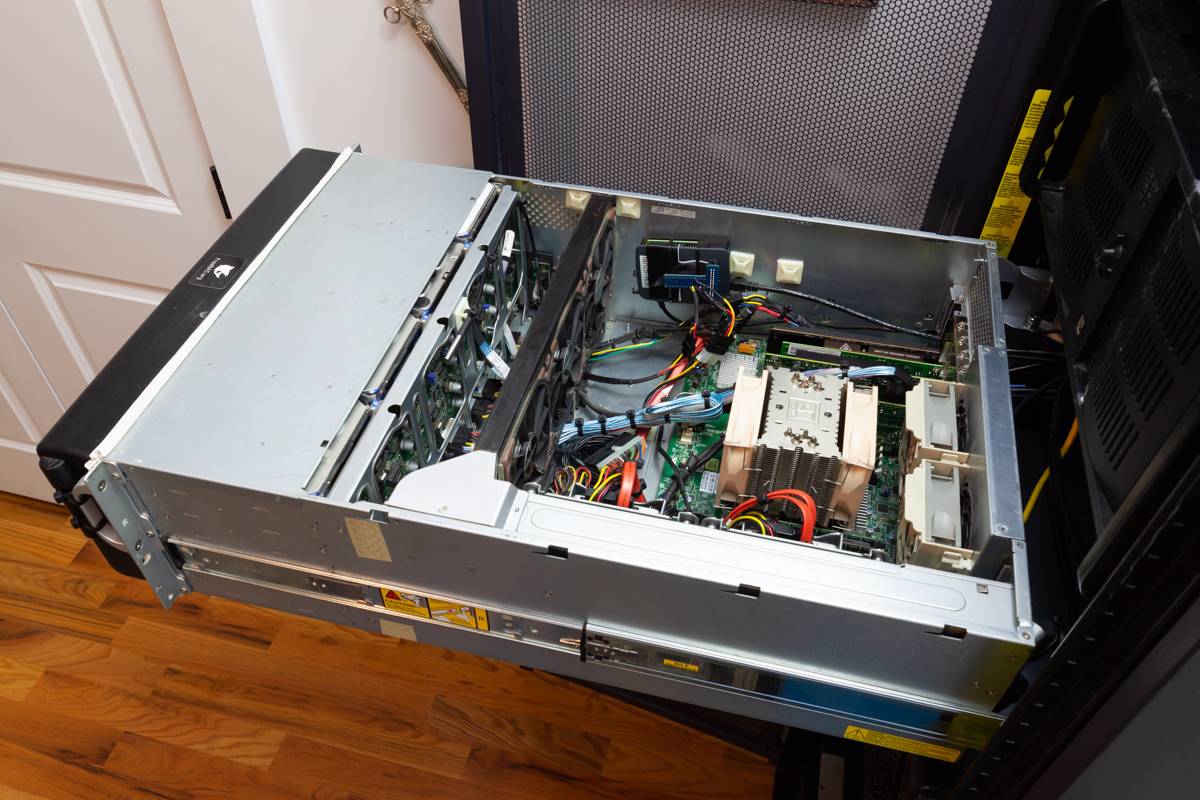 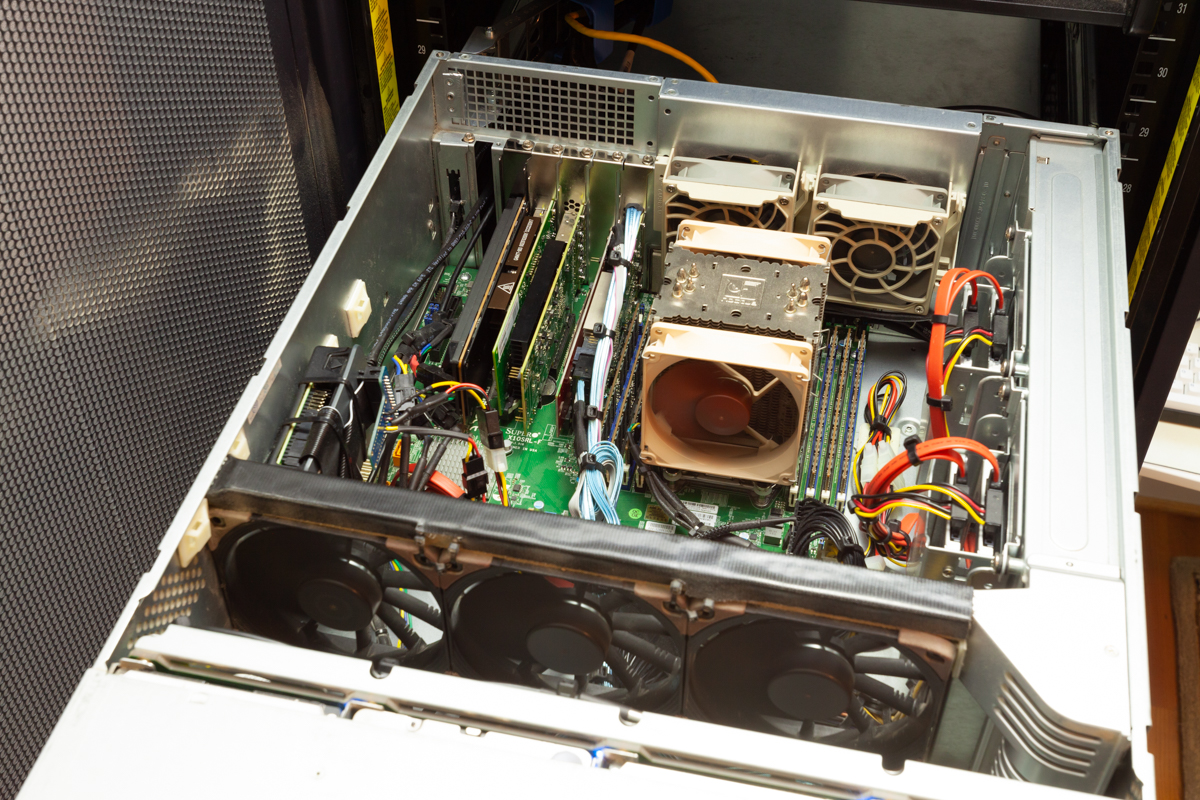 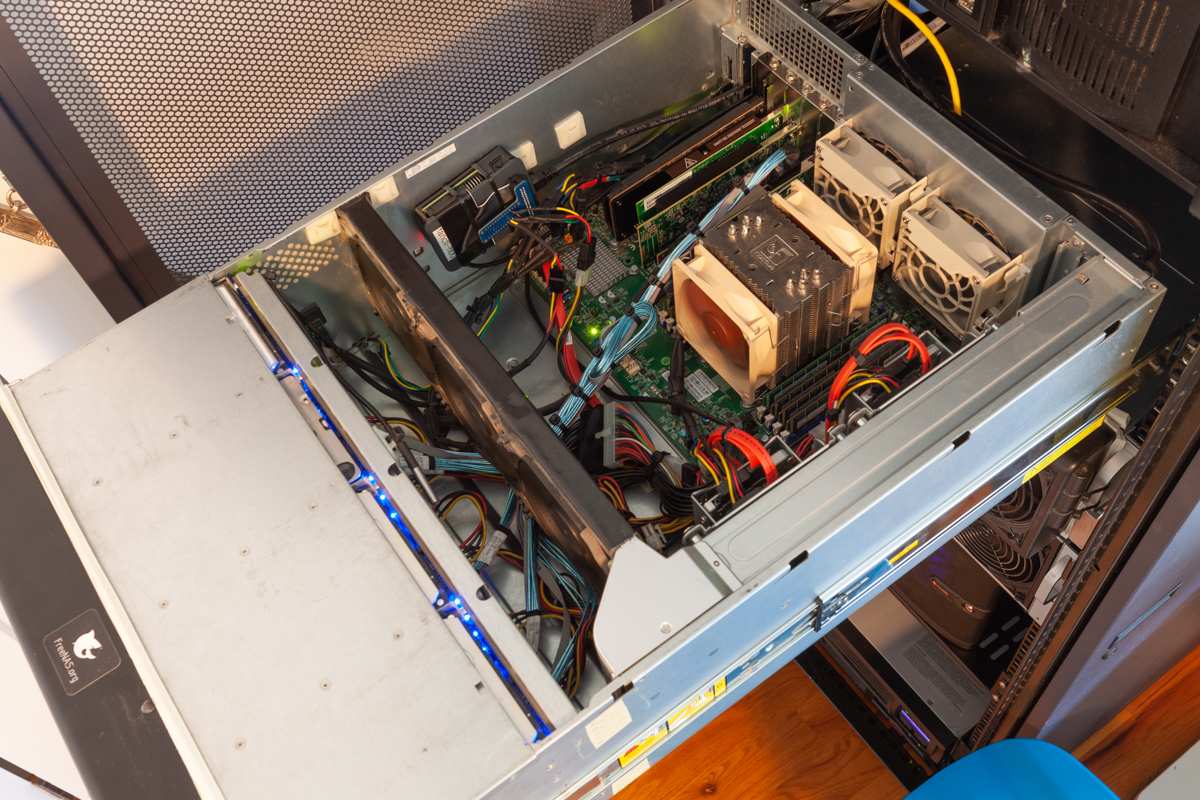 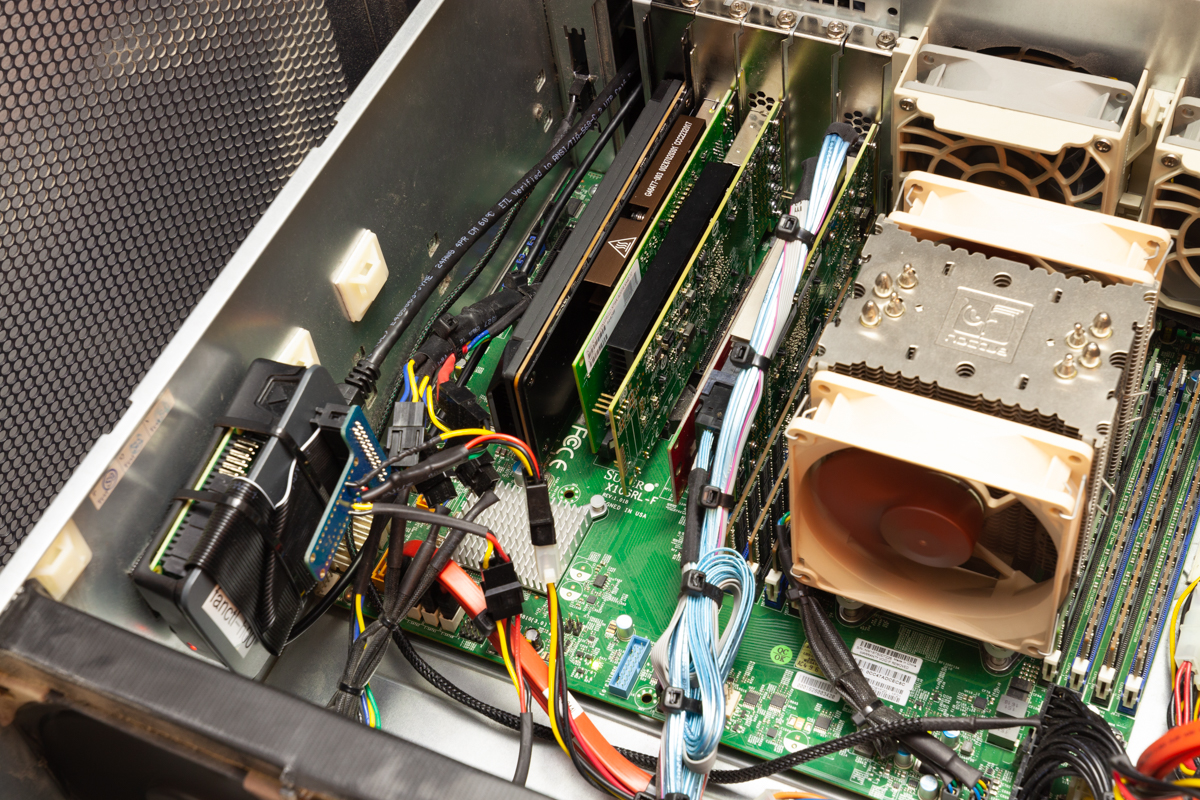 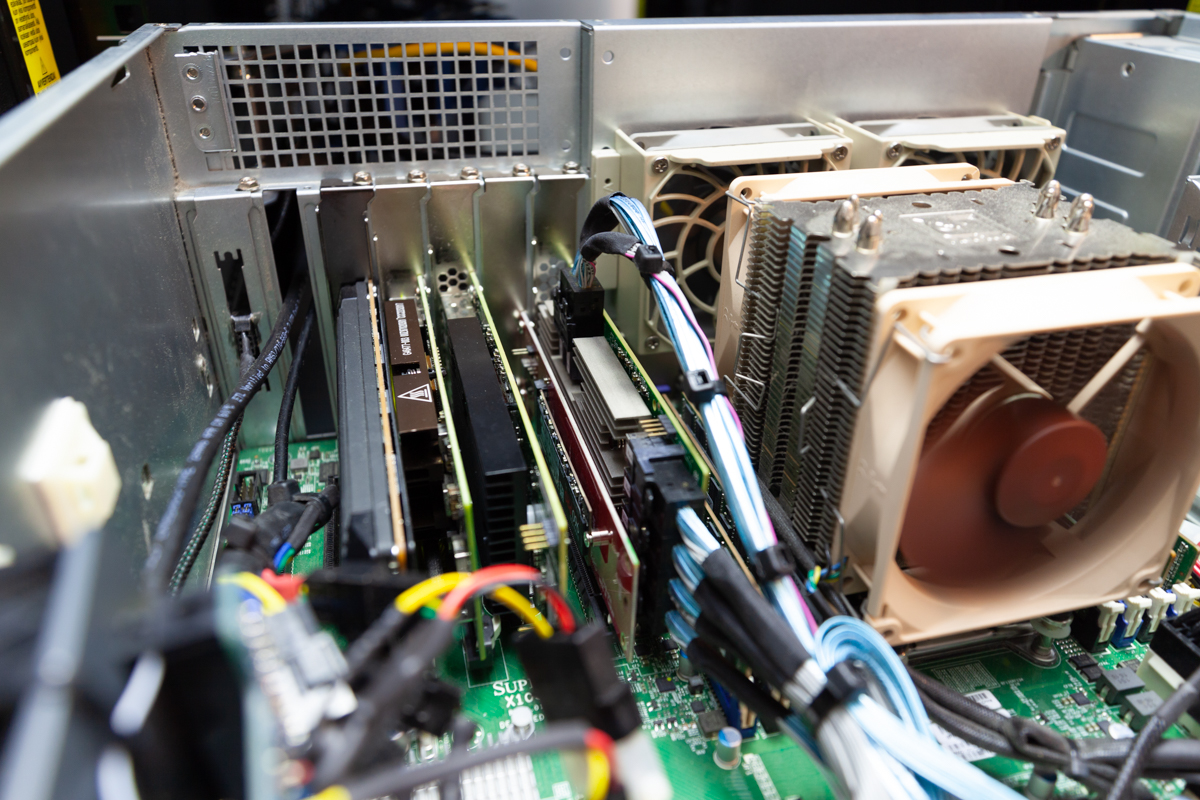 
This is a build I really had a lot of fun with. Trying to stuff my first custom water loop inside a gutted storage server chassis was pretty challenging, but it came together nicely. The 2990WX overclocks with AMD's Precision Boost Overdrive to ~3.8-4GHz on all cores. I've gotten scores of 13470 in the new Cinebench R20 with core temps around 65C. The 140mm fans in the front of the system are mounted in a custom 3D printed thing that holds the 360mm radiator on the other side. Eventually, I'll upgrade the GPU and put that in the water loop as well, but I don't do too much gaming, so it's kind of low on the priority list right now.

Data storage is a special passion of mine. I currently have a bit over 250TB of usable, fully redundant ZFS storage. As I mentioned above, I built a FreeNAS-based file server, which makes up the bulk of my total storage. The 'britlib' network volume is the primary storage pool on the server. I have 10 GbE networking between my workstation and the server and get ~800MB/s sequential reads and writes between the two over SMB. 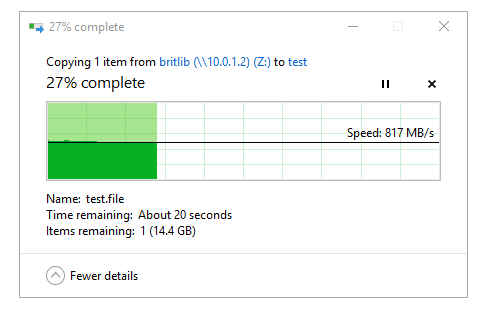